I have another review for you all! And guess what! It's not a beauty product this time! 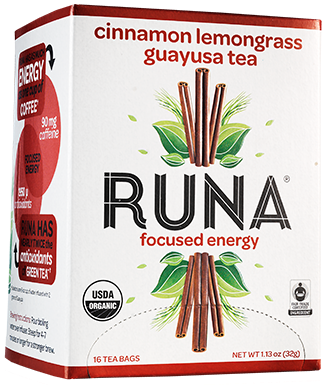 I received Runa Cinnamon Lemongrass Guayusa Tea from Swaggable to review.  I did a little research on guayusa before trying it - this is what I found.  Guayusa is a caffeinated tree leaf native to the Amazon.  The Ecuadorian Kichwa people have traditionally used guayusa to create a drink that gave "focused energy" and "sharpened their instincts."  Unlike most drinks with caffeine, guayusa is supposed to provide energy without a crash.  So...does this tea really do what it says it does?

Yeah, pretty much.  The first thing I was impressed by when trying this tea was the taste.  It's incredibly smooth.  I usually find that tea has a bitter or drying aftertaste. But not this tea.  I also liked the hint of cinnamon.  But did it provide energy? Yes! I actually felt awake and refreshed. I didn't experience a crash either. This tea is organic, gluten free, kosher, and a fair trade product.

Does this mean I'm giving up my coffee habit? No, my love for coffee runs too deep. But I will add this to the beverages I drink for some energy.  Overall - thumbs up!