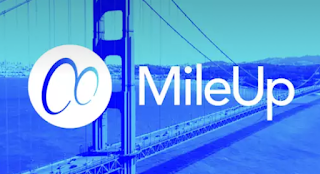 If you've been following this blog for awhile, you know I'm all about simple ways to earn free goodies.  I have participated in several programs (and remain active in a couple) and have used apps like ShopKick in the past.  I've honestly never had an issue.  Did some of the programs and apps take a little bit more work and patience than others? Of course.  But it was always a "what you see, is what you get," experience from the start.

But then I decided to try MileUp.  And my problem-free streak was over. If you haven't heard of MileUp, it's an app that collects your driving data and promises points that you can trade in for gift cards to places like Amazon and Target in return.  So the app is one that you download, set up an account, and that's it. It will automatically track the miles you drive (without having to open the app first) and you can check in every once in awhile to see how many points you've obtained. You can also participate in "challenges" which will give you extra points if you drive a certain amount of miles in a week.  If you get into a car accident with the app installed, MileUp promises to pay out $250 worth of points if you report your accident within the app. 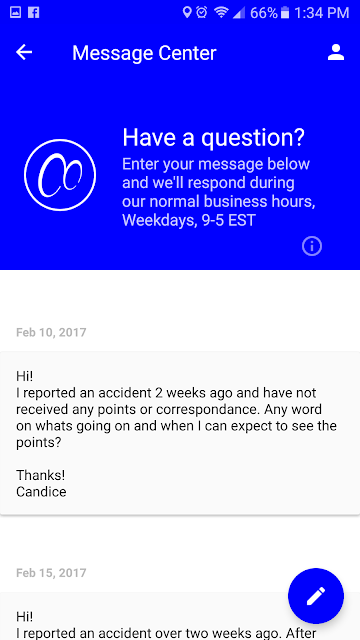 I was skeptical of the app and did my research.  Why did they need my driving data? And why were they willing to essentially pay for it? The app was covered by major (reputable) news publications like The Business Journal. It was stated that the app was owned by Agero, who provides accident scene management and roadside assistance for clients like Progressive Auto Insurance, Toyota, and Ford. Ok, so it made sense.

At first, the app seemed great and I recommended it to a few of my close friends.  My miles were tracking, I received points after my friends signed up and drove their first 10 miles.  Amazon gift card, here I come, right? Wrong.  When I signed up, you needed 2000 points (you get 2 points for every mile driven) in order to cash out and receive a $5 gift card. Seemed doable. Then, a few weeks after I installed the app, the requirement changed to 4000 points to cash out. People who had been with the app from the beginning were pissed. When they signed up, the requirement was 1000 points. To be fair, MileUp doubled my points when the requirement change was made.  So, while I was slightly disappointed, I wasn't as upset as other users and understood that as the app gained popularity, the cash out requirement would probably increase.

So what was the breaking point for me? Why do I NOT recommend this app? 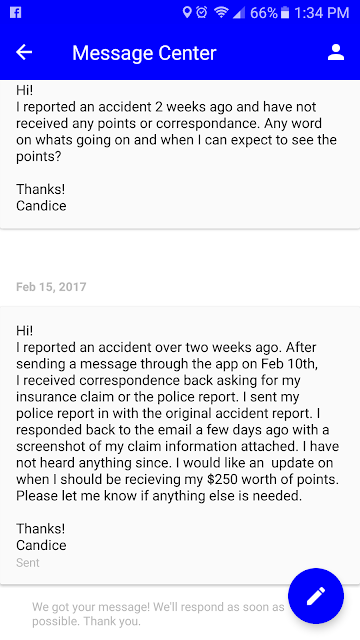 It's understandable that the driving data received during a car accident is pretty valuable to Agero.  After all, the entire point of the app is for them to "verify its ability to accurately determine when a crash has occurred" and then "sell that capability" to its clients. It's also reasonable to assume that not everyone who is using the MileUp app will experience a car accident during the time frame they have the app installed. But I did. Not long after downloading the app, I got into a car accident. Of course, my phone was with me. So the app picked up the data. I reported the accident that same day, provided all of the information asked for (including contact information), and was told (through the app) that it could take up to two weeks for my points to show up in my MileUp account  and I may be contacted by a representative if more information is needed. Ok, cool.

I waited for two weeks and still didn't see $250 worth of points hit my MileUp app. So I looked into contacting them. You can ONLY contact MileUp through the help section of the app. You may "leave a message" in the app and wait for a response.  But a  phone number and email address are not provided for contact purposes. So I left a message explaining I had reported an accident two weeks earlier and was looking for an update on when I should receive my points.  I received a response (in my email inbox) a couple of days later stating they needed more information from me.  I was annoyed. 1. Because they had my phone number and email address and I had not heard a peep from them asking for more information until I reached out and contacted them.  and 2. I had ALREADY PROVIDED THAT INFORMATION.  But I sent the requested info AGAIN that day. 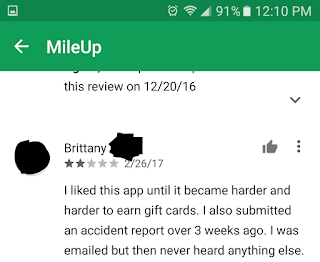 I waited a couple of days and heard nothing from the app.  No acknowledgment that they received my information. No response at all.  So I, again, contacted them through the app to make sure they had everything they needed. To this day, I have received no response. And, you guessed it, no points.  It's been over a month since I reported the accident.  I don't think I will be receiving my points, but they definitely received my data.

As if that wasn't bad enough, I suspect the app drained my battery AND made my phone freeze up and restart several times a day. All I know is that since I've deleted the app, my battery life has increased and my phone has stopped randomly restarting every time I try to do anything on my phone for more than 10 minutes. 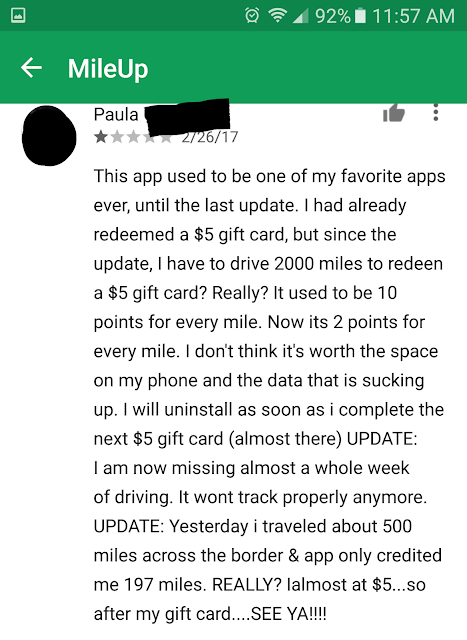 Other issues have been reported with the app.  A friend of mine downloaded the app right before going on a road trip. She would have been able to cash out by the end of the road trip had the app worked properly.  But about a hundred miles into her trip, her MileUp account reset back to 0. She couldn't get her miles driven back. So, not trusting the app, she uninstalled it. Others have had trouble with the app not properly tracking miles (giving credit for less than actually driven) and, of course, eating their battery life.

I also wanted to note that before I downloaded the MileUp app, I saw a review in Google Play by a user complaining they had not received their points after reporting a car accident.  I figured the user was maybe a little impatient and had jumped the gun on writing that review since all of the other reviews were neutral or positive in nature.

I also left a poor review on the app's Google Play page after my experience.  Today I searched for both my review and the previous review mentioned above and I have been unable to find either. They may still be there but buried at the bottom. I'm not sure.  But they are not visible after minutes of scrolling. (But I did find one review with a similar experience to mine that was left yesterday. Screenshot above.) It's also worth noting, that most of the poor reviews that were immediately visible (sorted by "most helpful") were written yesterday or today.

So my advice? Stay clear of this app.  There are much more reliable ways to receive freebies and gift cards without having to give your personal (location) data.

More screenshots of reviews below. 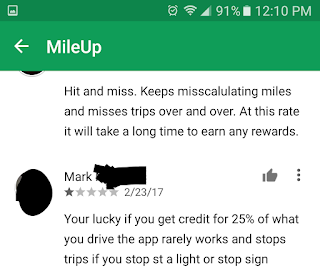 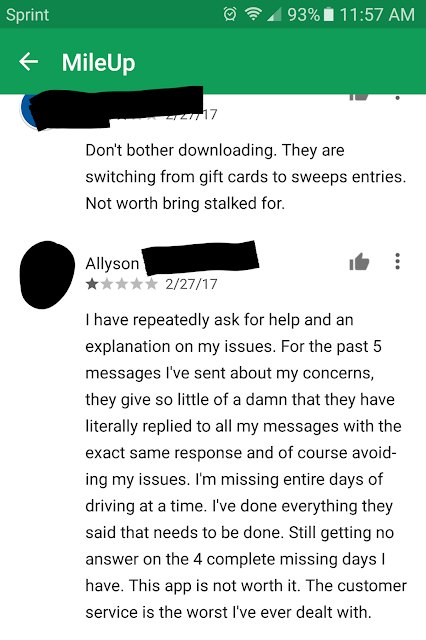 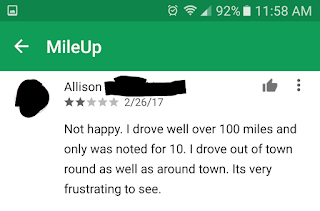